SPOTLIGHTING THE HIDDEN STORIES OF PEOPLE IN PLACES OF CRISIS.

World Forced Displacement and Mental Health Day is a global acknowledgement of the voices and lived experiences of people displaced by or living in today’s unprecedented humanitarian emergencies. In this context, there is an urgent need to recognise the integral role of mental health and psychosocial support (MHPSS). This day is a global initiative aimed at opening dialogue and consolidating human values for the dignity and self-determination of all people in places of crisis.

“Journey of Storytelling” is the inaugural event for Between Borders highlighting the world of culture and the arts and its ability to facilitate thinking on how we understand and respond to humanitarian crises. Our event consists of three presentations by the artists Daniel Cotterrell, Edwin Mingard and Mohsin Mohi-Ud-Din, each of which will be proceeded by a panel discussion. 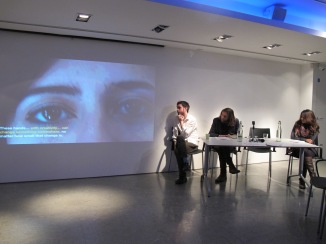 Mohsin Mohi Ud Din (USA) is the founder of #MeWeSyria and the current Director of Storytelling Innovation for Ashoka’s Youth Venture. Before Ashoka, Mohsin worked in public advocacy and strategic communications for the United Nations and UNICEF. He has been working for various human rights organizations since 2003. In 2009, he was granted a Fulbright Fellowship grant and in 2012 was named a United Nations Alliance of Civilizations Fellow. Since 2001, Mohsin has been the drummer for the indie rock and roll outfit, ‘Zerobridge’, who are releasing their new album on Carte Blanche Records this year. Mohsin’s family is originally from the resilient and beautiful Kashmir Valley.

David Cotterrell is an installation artist working across media and technologies to explore the social and political tendencies of a world at once shared and divided. Encapsulating the roles of programmer, producer and director, Cotterrell works to develop projects that reveal complexity, challenge linear narratives and embrace the quiet spaces that are overlooked as the sites for action.

Cotterrell’s work has been commissioned and shown extensively in museums, galleries and the public realm within Europe, North America and Asia. He has worked in conflicted landscapes, has been a consultant to strategic masterplans, cultural and public art policy for urban regeneration, healthcare and growth areas. He is Professor of Fine Art, Director of Research and Development for the College of Arts and Humanities at University of Brighton and a recipient of the Philip Leverhulme Prize.

Edwin Mingard is a visual artist who works principally with moving image, making standalone artists’ film and installations. He often takes on mainstream and accessible forms – documentary, music video, glossy magazine in order to engage with wide public rather than just art people who is around gallery environment. The intertwining strands of technological and social change are central to Mingard’s works, and of particular interest is the combined rise of computer processing power and the network that has happened within his own lifetime. His works has been commissioned by the BFI, RSA, Northern Film+Media, the Wellcome Trust, Film London and many other bodies, including academic institutions, public and independent arts organisations and festivals.

World Forced Displacement and Mental Health Day is observed every year on February 17 led by Between Borders.